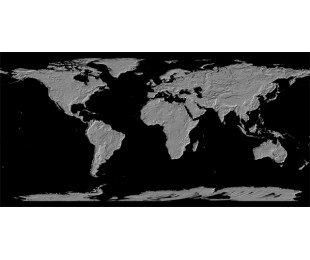 ASTER GDEM is an easy-to-use, highly accurate DEM covering all the land on earth, and available to all users regardless of size or location of their target areas. Anyone can easily use the ASTER GDEM to display a bird's-eye-view map or run a flight simulation, and this should realize visually sophisticated maps. By utilizing the ASTER GDEM as a platform, institutions specialized in disaster monitoring, hydrology, energy, environmental monitoring etc. can perform more advanced analysis.
Output format GeoTIFF, signed 16 bits
Geographic coordinates Geographic latitude and longitude
Tile Size 3601-by-3601 pixels (1-by-1 degree)
Posting interval 1 arc-second
Datum and Projection    WGS84/GEODETIC (reprojected for delivery)
geoid-9999 for void pixels
0 for sea water body
Stacking number or reference DEM
Coverage North 83 degrees to south 83 degrees, 22,600 tiles
Hilke Kracek |

We order the XSAR DEM product and merged these with the ASTER DEM Bundled data to fill null values, and the georeferencing was sub-pixel, and the finished product was astounding.
Albrecht Greil |

Ordered the ASTER DEM Bundleand the Landsat earth imagery, and we are very happy with the order.
Marian Schrade |

The ASTER DEM Bundled data is a perfect addition to our XSAR data ordered last year, and brings us a global 30m DEM file.
Nicholas Henrie |

The ASTER DEM Bundle helped us with global elevation coverages and we are about to purchase the complete lANDSAT whole earth imagery.
Luigi Lozano |

The ASTER DEM Bundled data is a perfect match to the XSAR SRTM data we ordered last month.
Cassandra Norr |

The ASTER DEM Bundle was was ingested into our Open Street Map tile server using online documentation and python scripts (mostle gdaldem and gdalwarp). We are perfectly serving contour and isoline data with shaded relief in the background.
Svendt Trich |

We purchased the ASTER data and synthesaize it with the 90m XSAR SRTM world data and use gdalwarp and gdaldem utilities to merge and blend artifacts out of the DEM.
Raymon Lozano |

The ASTER DEM Bundled data is a perfect match for WGS84-Geodetic datum and projection, to the XSAR SRTM dat awe ordered earlier from EOD. Combined, these data sets make up an extremely accurate and efficient DEM data set.
Darin Shiflett |

The ASTER DEM Bundle was a huge help for IMAX productions over the last few years. It really allowed us to produce Wildest Weather and other great IMAX planetary visualizations with great comfort and incredible render performances at 6K.
Harriett Freeman |

The ASTER data allows us to combine the 90m XSAR SRTM world data with these 15m ASTER data sets, and data fuse them together to have a truly harmonic 15m world elevation data set.
Horten Durrett |

The ASTER DEM Bundled data is an amazing set of over 10,000 images from the ASTER satellite which compliments our 15m Landsat EOD bundle purchased last year perfectly.
Umberto Huynh |

The ASTER DEM Bundle is very accurate and always updated to the latest work flows. EarthOnDrive has maintaned sub-pixel accuracies and data integrity and delivers some of the finest DEMs and DSMs around.
Stephen Day |

We found that downloading RAW ASTER DEM Bundled data was difficult and quite serial, until we simply decided to order the complete earth on a hard drive. Well done Earthondrive Team!
Gabriel Kotter |

We needed a gloabl 10-20m digital elevation model of the earth, and found the whole deal at Earthondrive last month, and ordered the complete ASTER DEM Bundled data.
Joe McCallister |

We just pruchased the ASTER DEM Bundle of the entire earth from Earthondrive and are extremely happy and resolved that our servers and mapping divisions have direct server access to this very high quality and accurate surce model.
Emi Alvarez |

The ASTER DEM Bundled data is an oging project and the most recent data can be purchased from EarthOnDrive. They have outstanding directory strucutres backing this data and have even worked on delivering two different export data sets (DTED and BGL).
Lutz Knoebl |

The ASTER DEM Bundle would have taken us months to organize and download from the two remaining sources. We had all data on our desktop within 3 business days, and at a price that others simply cannot beat.
Richard Davids |

The ASTER DEM Bundled data is a difficult and ongoing international product, and the 2014 version of ASTER DEM data from EarthOnDrive is an up-to-date useable 30m world wide data set.
Gottfried Perlmutter |

The ASTER DEM Bundle is a fine installation addition to our ArcGIS running server, where we dynamically change DEM raw data to cusotm maps and overlays. Purchased and delivered in 2-days and running off of our ArcGIS algorithms in under 1 hour. Fine product purchase and we are quite happy.
Kathrin Berg |

It was becoming ever more difficult to order the ASTER DEM Bundled data from other sources, so we ordered all of it on one 1TB hard drive, and it was delivered to Europe in a week. Great service and excellent product and thank you!
Ignaz Walter |

Our need for the ASTER DEM Bundle was solved in under 4 days as the product arrived via FEDEX. Would have taken a few employees weeks to download, but these guys have it tight and ready to ship on a hard drive.
Fred Knutsen |

The ASTER data is most difficult to organize and download, so we ordered the ASTER DEM Bundle and in under 1 week, we received the drive in Holland. Outstanding GEN4 product too.
Rolf Kranauer |

We bought the ASTER DEM Bundle generatrion4 instead of taking weeks to download the data. A fine job in keeping things structured on drive.
Maurice Mindel |

Our science projects rely on highly accurate topography data every day. This ASTER DEM Bundle came to us in under 3 business days, and if I had been working saturday, it would have just been 48 hours. Would have taken a lot longer to download these data sets.
Pat McKindley |

The ASTER DEM Bundle 30m is organized in a directory structure for inclusion into a database of dems, and we were able to drop this into our image web server almost instantaneously. Tremendous help with this license free product. Thanks.
Erich Schul |

Thank you for a great product and support.
Gertrude Simmeling |

Thank you for outstanding data and service.
Charles Bona |

I just wanted to say that I really like your products and I like the direction the company is going.
Nelson Porter |

Easy to deploy, intuitive. All the data Works great any remote sensing and GIS desktop/online server program. Ive been waiting for this type of inexpensive data collection. Excellent.
Jett Helitt |

This is a well designed directory structure and allowed an easy integration into ArcGIS and Web Winds. Very handy since the online server prices for geo data are extremely high. Recommended for all serious GIS contractors.
Ricardo Alvarez |

Ive really been enjoying the data I purchased. Setting up the ArcGIS stuff was easy using the ECW JPEG2000 SDKs.
Hossam Fawzy |

I would like to buy the whole data off of this site. In time.
Andy Aines |

Thoroughly recommended and worth every penny.
Karl Kelten |

What a pleasure to have purchased these data sets from you guys. A good way to eliminate the need to download all this data individually!
Jason Cletor |

These are the data products I have been awaiting. No more downloading!! Well worth the price.