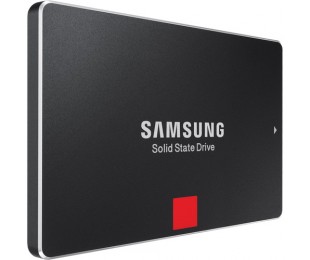 The 512GB 2.5" SSD 850 Pro from Samsung is an internal drive that offers storage space for Windows and Mac systems. This SSD features 32 layer 3D V-NAND technology that offers twice the speed and density of traditional SSDs. This feature provides up to 100K IOPS random read speed and 90K random write speeds. Sequential read and writes are up to 550 MB/s and 520 MB/s. This SSD can also offer higher speeds by enabling RAPID mode. Besides offering performance, the SSD 850 Pro uses 50% less power than traditional hard drives and supports device sleep mode that uses only 2mW.

Flash memory is stacked to 32 cell layers, on top of one another, to offer higher density and higher performance within a smaller footprint. The result is higher read and write performance in both sequential and random speeds. Magician software offers the option to enhance performance by using the computer systems DRAM memory as a cache. Enabling RAPID mode can double the read and write performance. When compared to DDR2 or DDR3 cache memory used in other SSD drives, this drive uses LPDDR2 cache memory that offers higher performance while using 30 percent less power when active and 93 percent less power when idle.

Includes hardware AES-256-bit encryption that secures your data without the lost of performance when compared to software-base encryption. All 850 Pro SSDs are enabled with SED technology that keeps your data safe even if you lose your computer. Complies also with the TCG Opal v2.0 standards, PSID, and is compatible with IEEE 1667 protocol. You can also erase or initialize date using crypto erase service.

There are no reviews yet.